The majority of bacteria in our bodies reside in the gut – Firmicutes and Bacteroidetes are the most dominant phyla. These, and other bacteria, are responsible for metabolizing our food, developing and maintaining our immune system, and cross-talk with our hormones – big jobs! (12, 13, 18) As such, when things become imbalanced or shift to less desirable populations the outcome may spell trouble. Several disease states begin in the gut or can be attributed to an imbalance of gut bacteria: obesity, inflammatory bowel disease, diabetes, metabolic syndromes, mood and other psychological disorders, and countless more. Even autism disorders and complications have been considered to stem from issues in the gut! (16) Further, changes that may occur naturally or passively during one’s lifetime can alter the gut microbiome; for example, early colonization during infancy and childhood and changes during pregnancy are considered necessary and beneficial for overall fitness and health.

The changes that occur during pregnancy are of particular interest to me right now during my first pregnancy. Specifically, I am curious about how the gut microbiome affects mood disorders, especially anxiety and postpartum depression. Later, I plan to examine the mitigating effects probiotics may have on mood disorders, preeclampsia and gestational diabetes mellitus.

Our gut microbiome plays a role in almost all other body systems through complex bi-directional pathways affecting the immune system, neuroendocrine, hypothalamic pituitary adrenal axis (HPA axis), short chain fatty acid and neuroactive substance production, and the sympathetic and parasympathetic arms of the autonomic nervous system (1, 4, 17, 19). It should come as no surprise that those important microbial populations also impact mood and mental health, even in healthy individuals (11, 20). The delicate balance of gut microbes is even more essential and important to maintain for pregnant women and new mothers as their bodies undergo significant transformations. 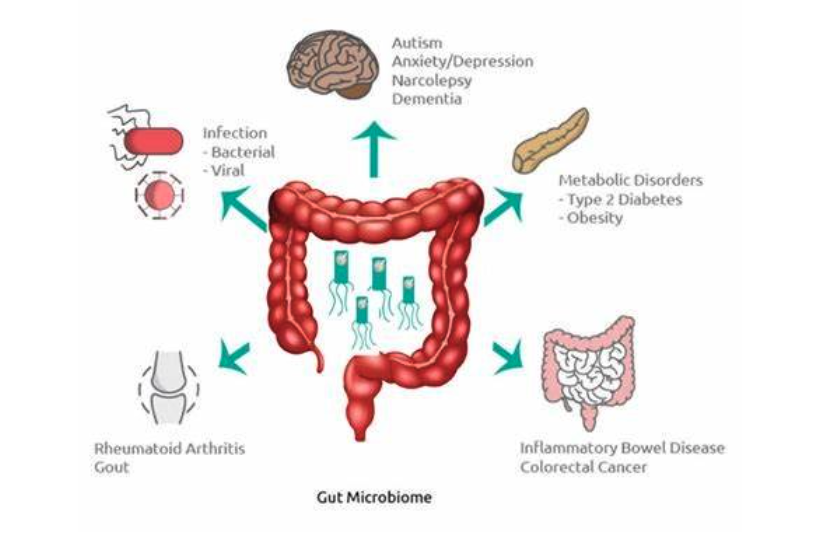 What is normal for my gut and what changes should I expect?

A healthy pregnancy is characterized by increased bacterial load and shifts in population of the gut bacteria; with significant changes occurring between the first and third trimesters (3, 9). The changes in the gut microbiome that happen during the third trimester are largely responsible for the weight gain, insulin resistance, and inflammation. Fortunately, those uncomfortable changes happen for a good reason; they are more or less a side-effect of what is actually happening inside the changing pregnant body. The weight gain and insulin resistance allow enhanced glucose and fatty acid adsorption, increased fasting-induced adipocyte factor secretion, induction of catabolic pathways, and both stimulation and inhibition of the immune system are all necessary to help provide what the growing baby needs (14). After giving birth the changes do not stop and is when the populations are more likely to become imbalanced.

So how does all of this influence mood disorders such as anxiety and postpartum depression?

Well, all of that change can sometimes go awry – perhaps the ideal balance is not achieved or perhaps some other factor (antibiotics, stress, poor diet, complications during delivery, etc.) has altered the population in your gut. This can result in some of those “good” gut bacteria being outnumbered by less desirable populations or it may impact the balance of hormones that are already working extra hard in the pregnant and postpartum body. Specifically, patients experiencing major depressive disorders had an increased abundance of Bacteroidetes, Proteobacteria, and Actinobacteria and a decrease in Faecalibacterium compared to healthy patients (8, 10). Further, a lower abundance of Faecalibacterium was correlated to more severe depressive disorders, possibly due to a sharp decrease in butyrate production (20).

Why is butyrate important?

Butyrate is essential to a gut health and also contributes to the function of other body systems by providing energy for colonic mucosa and aiding in the regulation of gene expression and inflammation (5, 7, 13). Decreases in butyrate production have been shown to influence the onset of postpartum depression (17, 18, 20). One theory suggests that this may be due to decreased function of the hippocampus and diminished expression of brain-derived neurotrophic factor which can function as an antidepressant. Others have noted that the fecal microbiota of mothers with lower anxiety could be characterized by higher abundance of the Eubacterium and Oscillospira compared with mothers with higher prenatal anxiety (6). One study found that patients with postpartum depression had a higher abundance of Enterbacteriaceae, such as Escherichia_Shigella (20). If significant and reproducible, this finding could help us predict a risk for clinical depression and postpartum depression. An overgrowth of Enterbacteriaceae could increase inflammation in the gut and cause permeability of the gut wall allowing bacterial translocation and thus, systemic inflammation and a cascade of inflammatory reactions elsewhere in the body. (18). Not ideal for a postpartum body that is already working hard to heal itself!

Together, these findings suggest that inflammation in the gut has a strong correlation with mood disorders such as depression, postpartum depression, and anxiety (2). As if the fragile life you are bringing into this world is not enough responsibility, we must also keep track of our gut bacteria! Of course, most of us have no idea of the populations composing our gut microbiome. If you suspect you are suffering from or are at risk for postpartum depression, anxiety, or another mood disorder please discuss it with your doctor. Otherwise, keep up with a balanced diet, plenty of rest, and perhaps a probiotic supplement to help prevent the onset of a mood disorder – more on probiotics next time!

We use cookies on our website to give you the most relevant experience by remembering your preferences and repeat visits. By clicking “Accept All”, you consent to the use of ALL the cookies. However, you may visit "Cookie Settings" to provide a controlled consent.
Cookie SettingsAccept All
Manage consent

This website uses cookies to improve your experience while you navigate through the website. Out of these, the cookies that are categorized as necessary are stored on your browser as they are essential for the working of basic functionalities of the website. We also use third-party cookies that help us analyze and understand how you use this website. These cookies will be stored in your browser only with your consent. You also have the option to opt-out of these cookies. But opting out of some of these cookies may affect your browsing experience.
Necessary Always Enabled

Performance cookies are used to understand and analyze the key performance indexes of the website which helps in delivering a better user experience for the visitors.

Analytical cookies are used to understand how visitors interact with the website. These cookies help provide information on metrics the number of visitors, bounce rate, traffic source, etc.

Advertisement cookies are used to provide visitors with relevant ads and marketing campaigns. These cookies track visitors across websites and collect information to provide customized ads.

Other uncategorized cookies are those that are being analyzed and have not been classified into a category as yet.